Task Description: Ms. Tapuke gave us a task to do, It was a create task, I chose to do, to introduce myself and ask you people and Daisy some questions.

Task Description: Ms. Tapuke gave us this task to do, we have to record our self do the word groups.
Posted by Bradley at 10:23 No comments:

HAMILTON NEWS
Therapy dog at Hamilton school proving to be a top teacher
15 Mar, 2019 by Tom Rowland
At 11 weeks old,/ Daisy joined the school two weeks ago/ to be trained/ as a therapy dog,/ and as students enter/ Te Ao Mārama primary school/ in Flagstaff each morning,/ they are greeted/ by a small furry/ spoodle Daisy, the latest member/ of the school's staff.

Deputy headmaster/ Anna Pratt — and Daisy's owner — said she became interested/ in the growing phenomenon/ of therapy dogs being used in schools around the world.

"It is really popular in America,/ and also in Australia," Ms Pratt said. "There were a lot of things we considered,/ such as the breed, the size, the type of coat/ — Daisy has a wool coat/ so she doesn't trigger any allergies./ She has been at school/ now for a couple of weeks,/ and she has been growing/ in confidence and the students/ have been getting more confident around her/ as well."

Daisy, who is a half poodle and half spaniel,/ is identified by the fluoro orange jacket/ that has been specially made for her,/ to show that she is a dog/ in training, and to also make her stand out/ when at school events./

Ms Pratt said that having a therapy dog/ as young as Daisy/ also helps with dog education,/ and the responsibility/ that comes with owning/ a dog.

"I was astounded/ as to how many kids/ here had never touched a dog/, or even seen a dog."
"So many kids come up/ saying I'm really scared of dogs,/ but I really want to pat her/ and now those kids are some of the ones/ who come up first to greet/ Daisy."

Daisy's routine/ includes heading to road patrol/ in the morning and roaming// through the learning areas of the school or teaching spaces./

"Children will read/ to her or draw pictures/ for her in class, and then after that she will eat/ and sleep/ for a bit."

"In research it shows that patting a dog/ releases the feel-good hormones/ and it just helps settles the kids,/ and they don't become distracted."/

Task Description: Ms. Tapuke gave us this task to do, In the news, Therapy dog in the news reading task. We have to do the word groups for this task, adding slashes means word groups.
Posted by Bradley at 09:57 No comments: 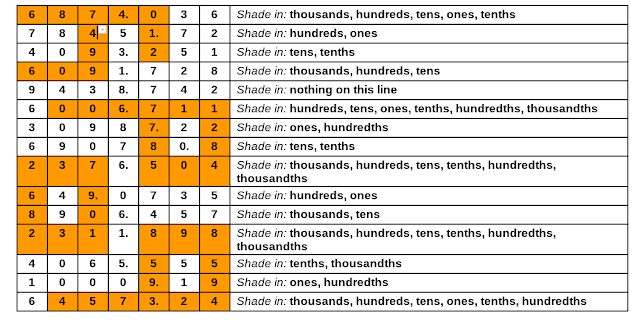 Task Description: Ms. Tapuke gave us this sheet to do on our Chromebooks, We have to figure out the word by doing the numbers above, we have to colour the square that contains the number, This is called 'Decimal Delight Worksheet'. We will get a word at the end once we finish figuring this out. There is a secret word, When your done.

Task Description: Ms. Tapuke gave us this task to do, we have to get in google slides or a google document. We have to write what we did last week on Friday at Matariki Day.
Posted by Bradley at 10:16 No comments:

Create Task: How we celebrate Matariki at Point England School.

Task Description: Ms. Tapuke gave us 3 create tasks, We have to choose between the 3, and pick 1 to do. I chose to do How we celebrate Matariki in Point England School. I gave some sentences,  on what we do on Matariki day, and how we celebrate it.
Posted by Bradley at 13:59 No comments:

Malo e lelei! My name is Bradley and I am 11 years old. I am a half- Samoan and I love expressing my culture in different ways! I am a Year 7 attending to a school named Point England School ( Primary/Intermediate) in my hometown Auckland, New Zealand.

My hobbies are playing video games and sleeping late and watching movies. My favourite movies to watch is like Scary Movies and some not scary movies. I sometimes don't watch some scary movies much because there to scary and I might get nightmares when I sleep, and sometimes I like watching non-scary movies, because they make me have some good and nice nightmares. I love sleeping in late, because I can take more time doing whatever I want, but waking up late in the mornings because of the lateness I stayed up at.

Who is visiting this blog?